I have been building and repairing musical instruments since 2007, and this blog is for those who are interested in my work.

Please feel free to click the button below to email me with any inquiries regarding custom work.

Earlier this year I had the chance to play a Gibson SG and I immediately found it to be the perfect size and shape for me. I don't play 6 string instruments much anymore, so I began thinking about how to make a 4 string version.

About a month ago I found an inexpensive, used Epiphone SG VE and I decided to convert it to a 4 string. I have another instrument that's working fine for me at the moment, and I've had my hands full with customer instruments, so I haven't made too much progress on this yet. However, I thought I would share what I have done so far.

Here is a stock photo of the headstock it came with... 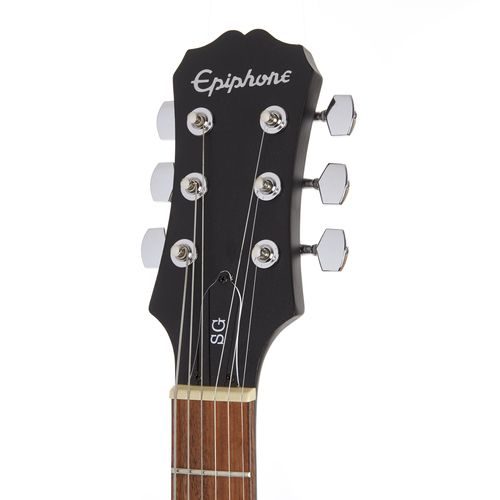 The first thing I did was pull off the tuning machines and cut some circular plugs from mahogany stock to fill the two middle holes on either side. After they were securely glued in place, I lightly sanded the headstock to remove the logo and smooth out the two plugs. I used an airbrush with some black tinted satin lacquer to spray a light coat over the top, and finally I installed some better tuners with an antique brass finish. 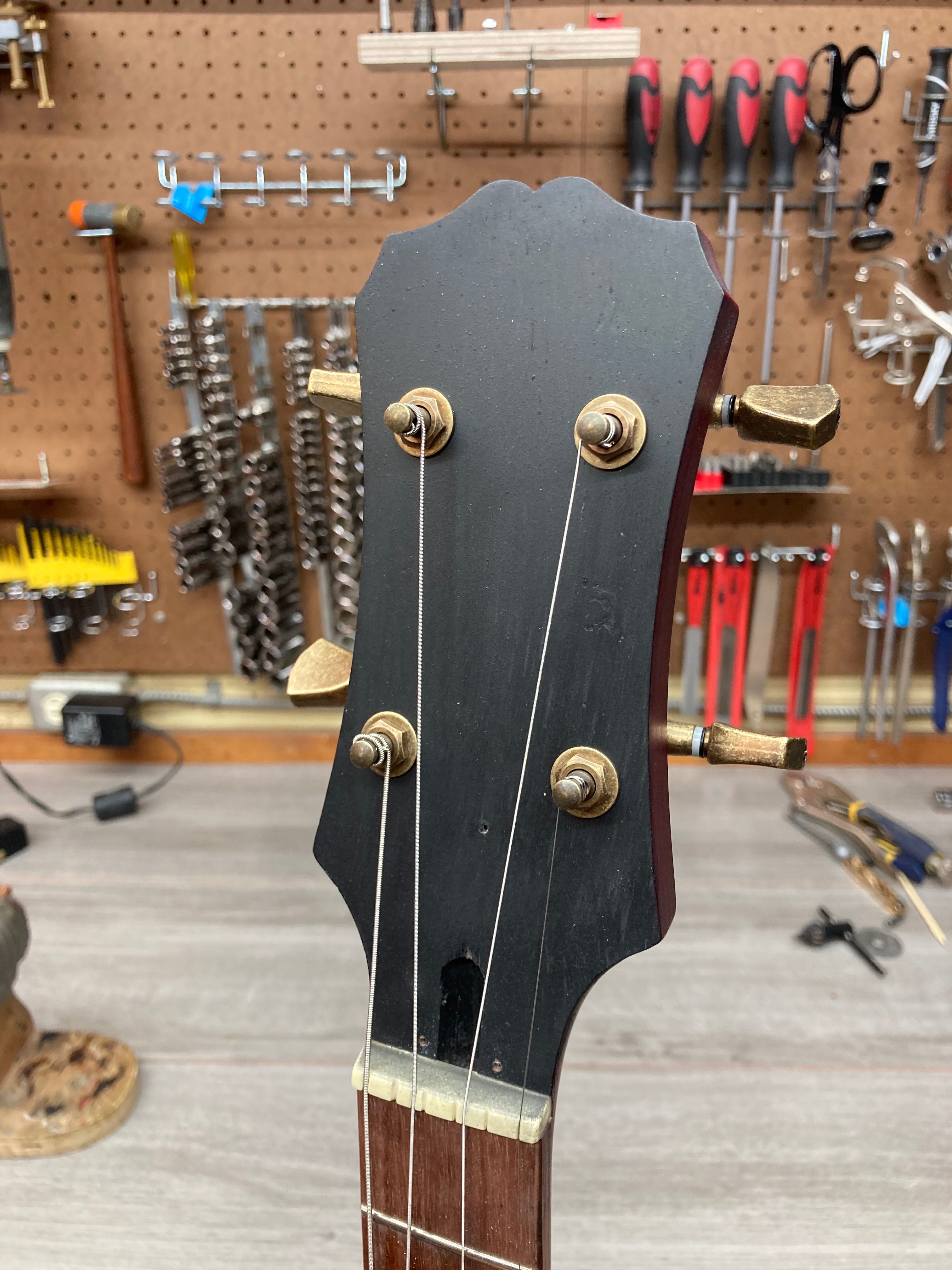 Eventually I will replace the nut, but for now I have made two new slots to space the strings. 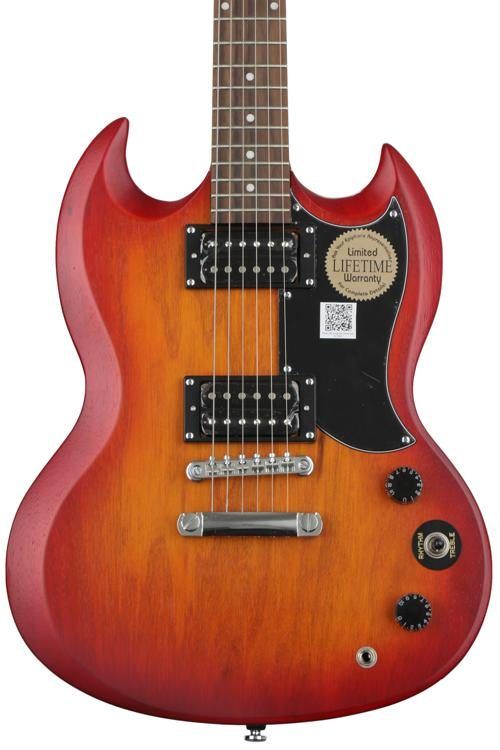 I may change my mind about this later on, but at the moment I am going to keep using the tune o matic bridge and tailpiece. I replaced them, as well as the knobs, switch, and pickup rings, to go with the new color scheme. 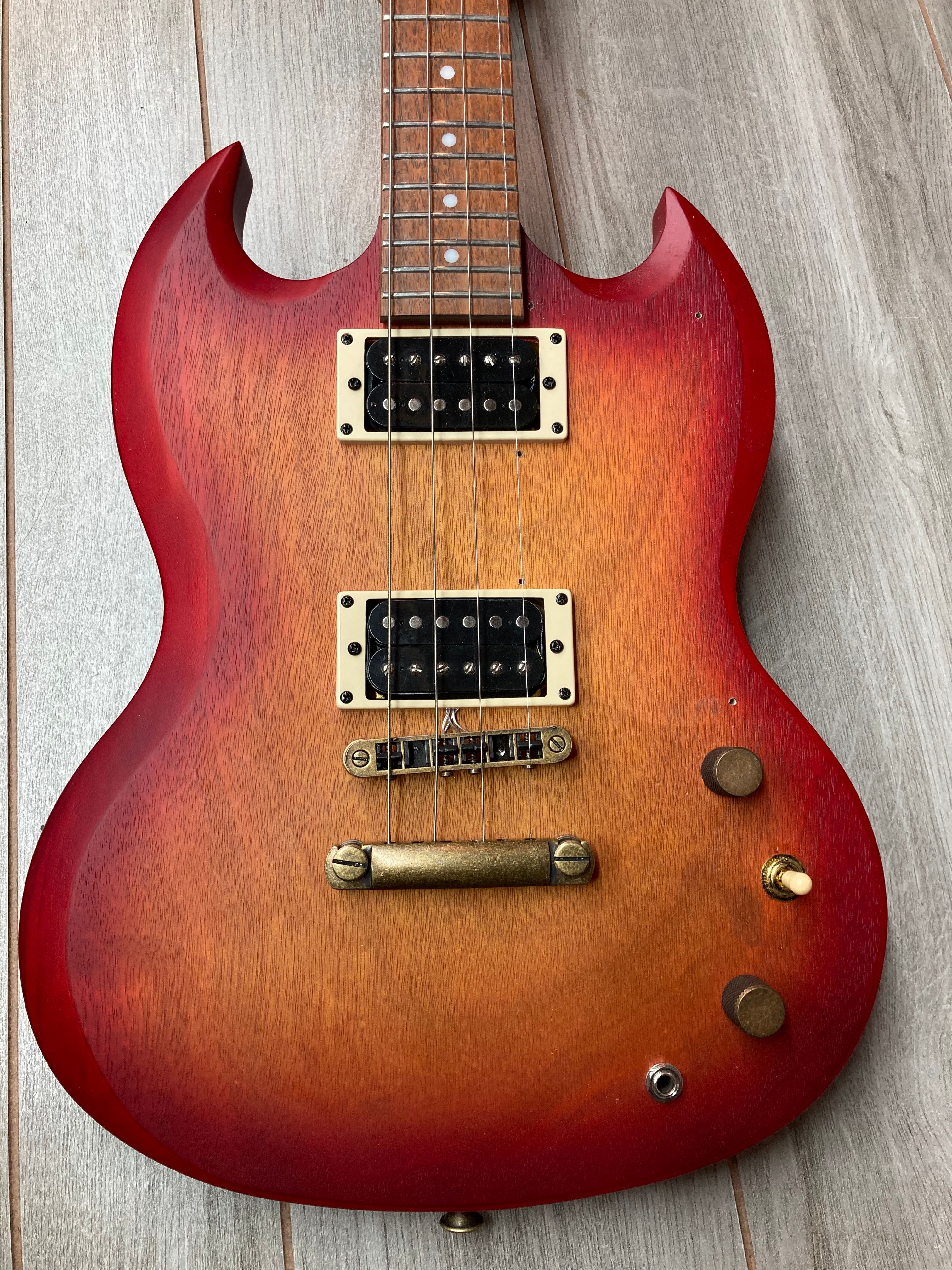 As for the tailpiece, I first had to drill new holes to space the 2nd and 3rd strings evenly between the 1st and 4th. 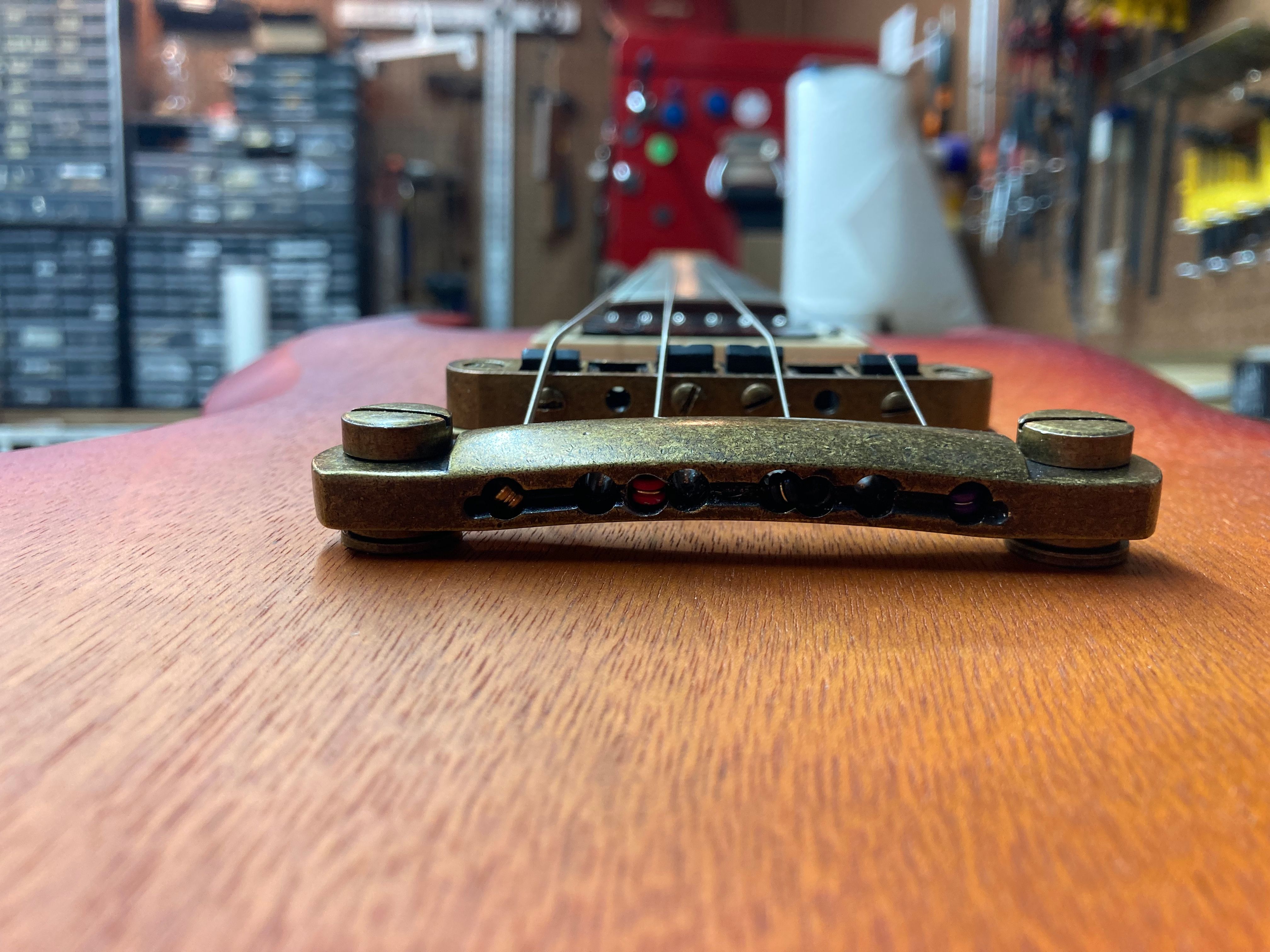 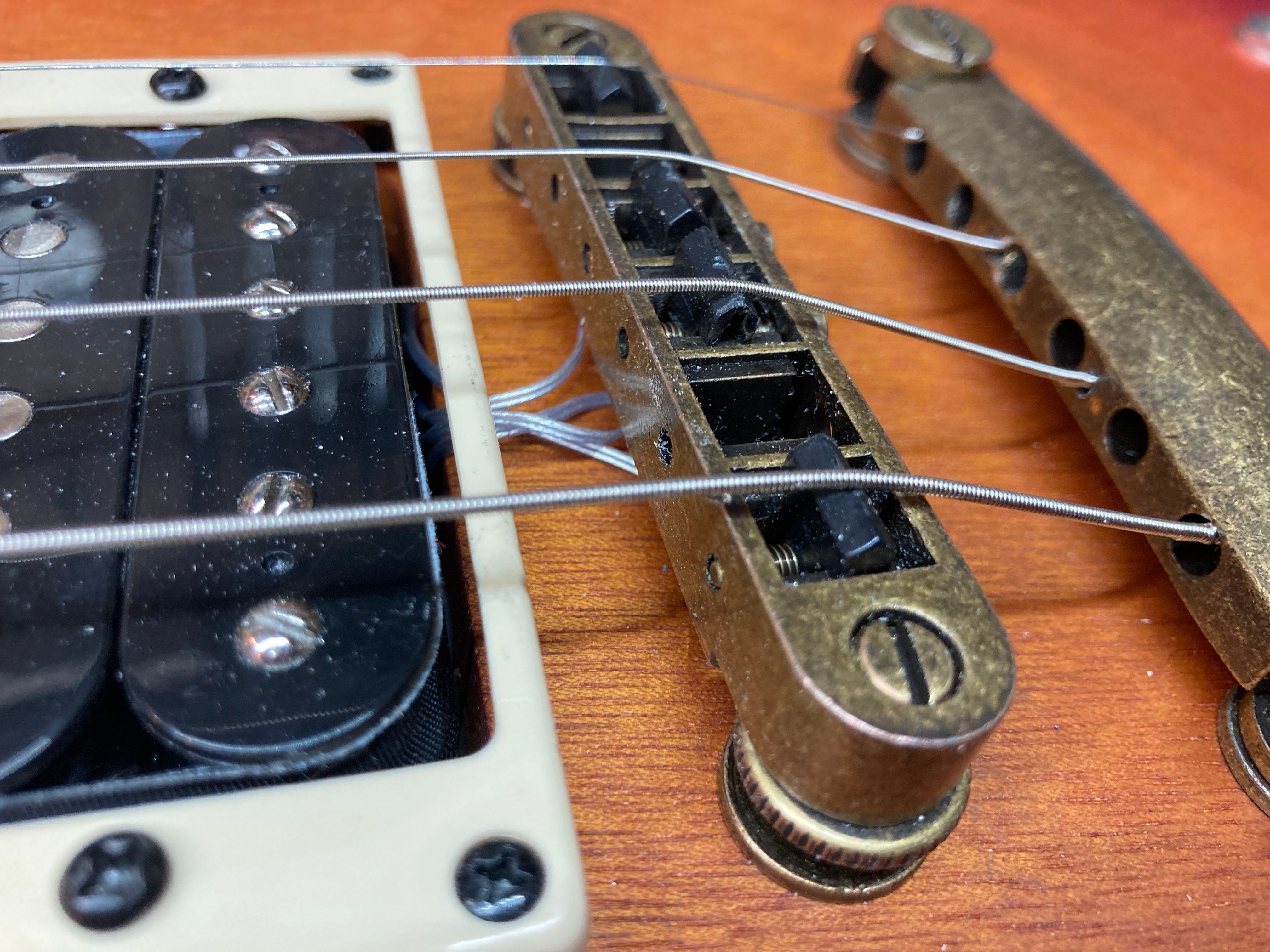 This doesn't look the greatest up close, but it does the job and it looks fine from a distance. Oh, I should mention that the saddles have piezos built in which is the reason for the wires coming out from underneath the bridge. That was an interesting project all by itself which I will share in another post!

That's all for now, but I'll keep you updated as it progresses!

Now I will finish this project! The next step is to glue on a new laminate piece to match the one I removed. Here is a picture of the laminate being glued and clamped to the tailpiece. 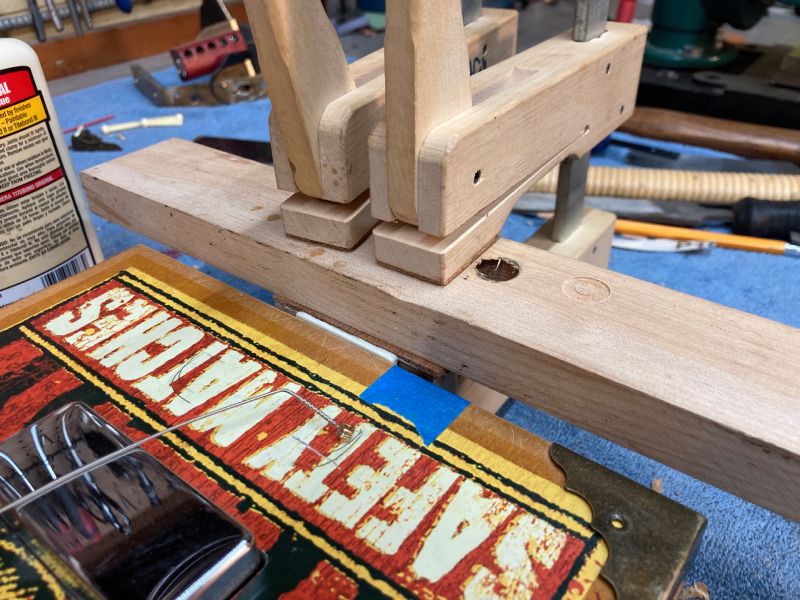 Now it is glued in place, but oversized. 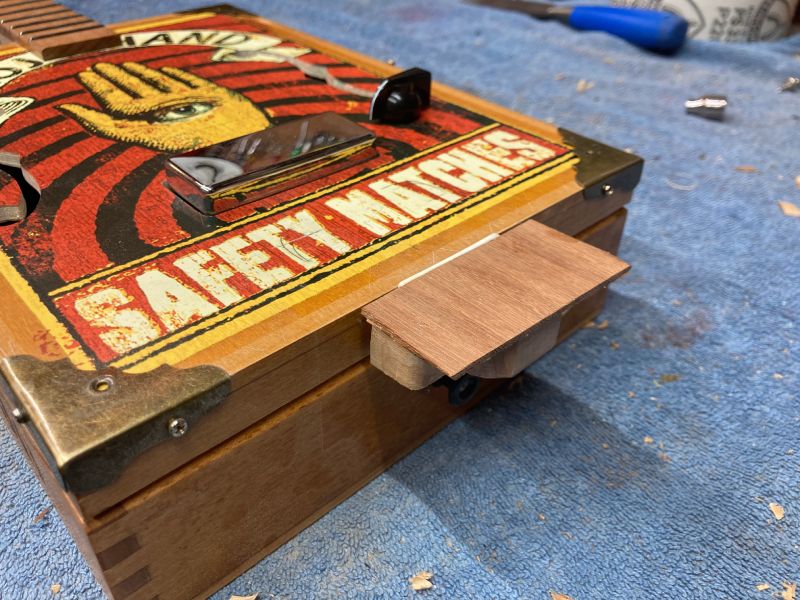 Here it is trimmed more closely to the tailpiece, but there is more to go... 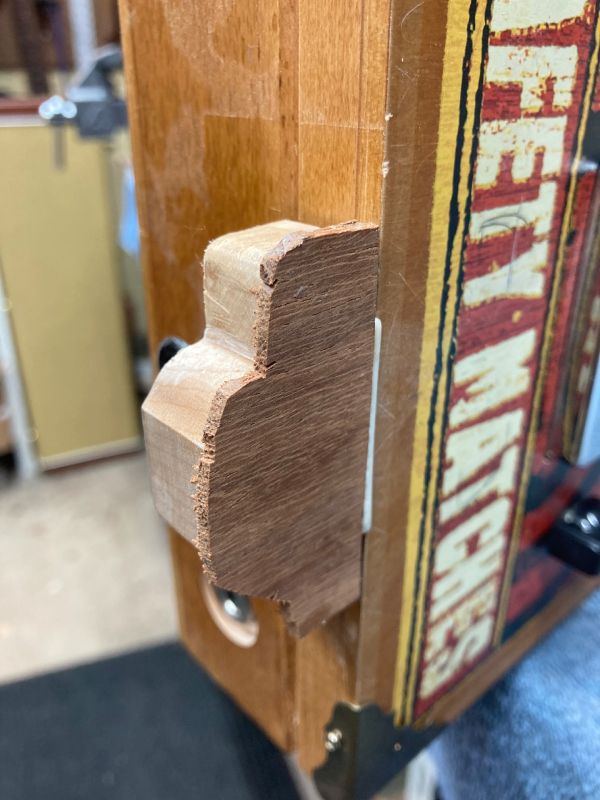 Here it is with the laminate trimmed flush to the tailpiece, new holes drilled with the correct spacing, and a light satin finish applied to match the rest of the instrument. This customer was very happy with the work, and now he can play the guitar without the 4th string popping out of place! 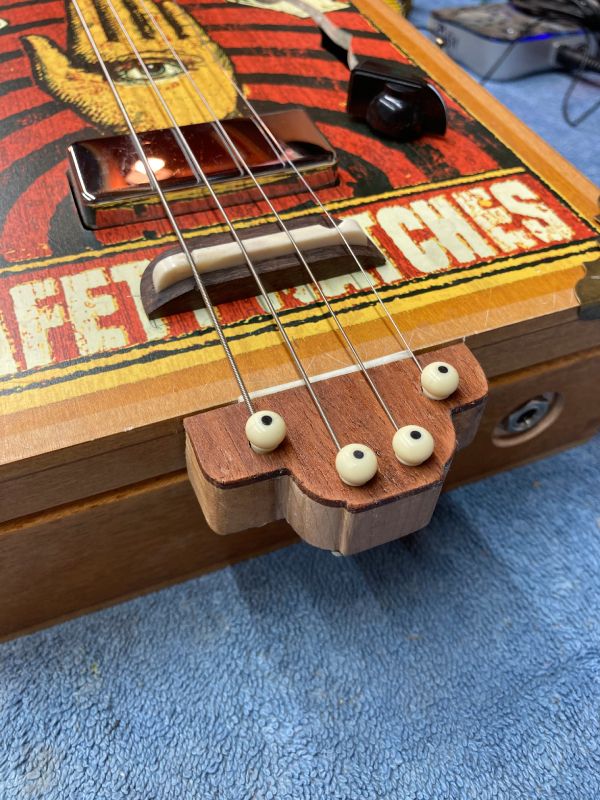 The work begins! I started by removing the bridge pins and sanding off the top laminate. I then filled the two outer bridge pin holes with dowels. 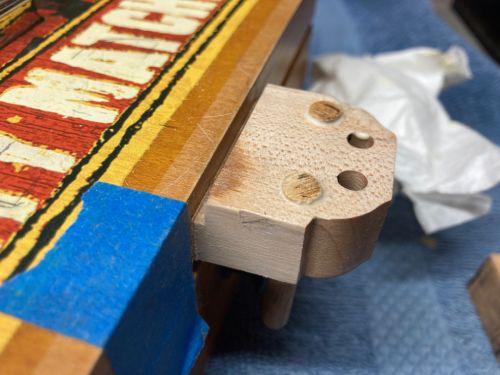 Next, I used a chisel to slice off the tops of the dowels to make them flush with the top of the tailpiece. 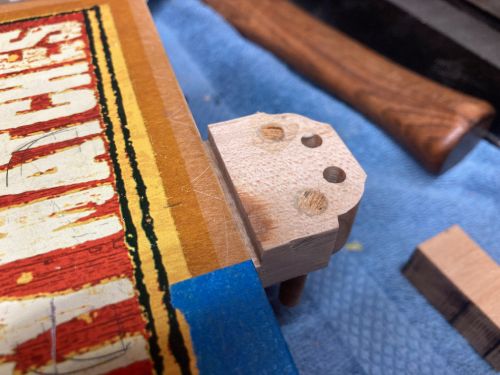 After that, I cut two pieces of maple with a similar grain pattern and glued them to either side of the tailpiece. 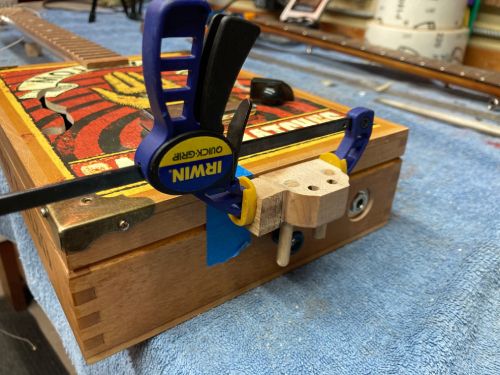 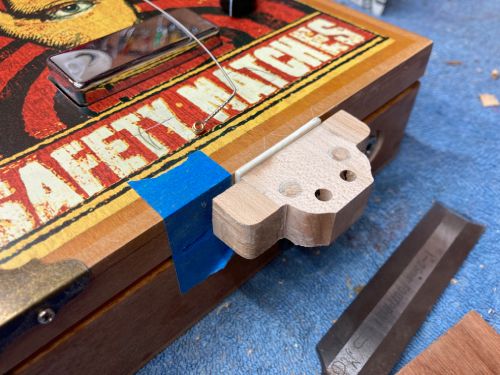 In the next post, I will show how I finished it up!

Recently a customer brought me his Mojo Daddy cigar box guitar because the lowest string kept sliding out of the groove in the saddle. As you can see in the following picture, the bridge pins on the tailpiece are much more closely spaced than the strings are supposed to be on the saddle. Therefore, the highest and the lowest strings contact the saddle at too much of an angle to stay in place. I decided to widen the tailpiece (which is actually part of the neck that runs through the body) in order to move the 2 outside bridge pins and provide a straight path for the strings over the saddle. In my next post, I will show you how that process played out...

Instruments in the making...

This is the new blog where you will be able to follow along with my various musical instrument projects. Some of them will be those I design and build for use in my performances, and others will be custom work for clients.